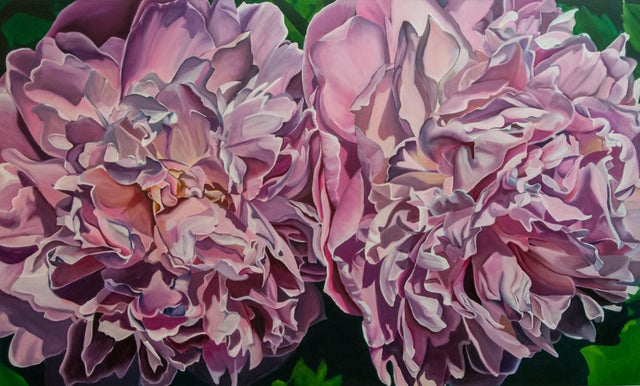 Few flowers are as stunning as the peony; known for their delicate petals and distinctive fragrance. There are two Greek myths that describe how the peony got its name. One tells of Paeon, Paeon’s teacher was jealous that Paeon was more talented than him, he was saved from his teacher’s wrath when Zeus turned him into a peony. The second myth tells the story of the nymph Paeonia, and how she attracted the attention of Apollo. Aphrodite saw this and was angered and turned the nymph into a red peony.

Most common meanings of the peony include romance, prosperity, good fortune, a happy marriage, riches, honor, and compassion, but peonies can also mean bashfulness. It was in the Eastern European countries that peony got its symbolism of modesty, bashfulness and shyness. They believed shy nymphs and fairies hid their naked bodies between peony petals.

I was struck by the bashful symbolism for peonies and when I named it “Bashful Beauties” it draws from the fact that the blooms get so heavy that they start to droop from the weight of their flower. It reminded me of a bashful person looking to the ground and not making eye contact. Still beautiful but not calling attention to themselves.